Vacation Diving, Certification Dives, Exploration Diving,…. Whatever your desires are, you can probably do it on one of our organized Scuba Dive trips. Travel and Dive with experienced, certified PADI instructors; friendly, safety conscious, knowledgeable and Fun! We have travel plans that fit your style, needs and budget. Check out our web pages for details and fun stories, and call if you need more information, or are just ready to hop aboard the next flight out!

When purchasing DAN insurance, please include our Tri-State Scuba account and store number:

WE  ARE TAKING DEPOSITS ON OUR 2023 TRIPS. ADDITIONAL 2023 DESTINATIONS ARE STILL BEING SCHEDULED. GRAB YOUR SPOT……OUR TRIPS SELL OUT FAST!!!

HALLOWEEN IN THE SPOOKY LAND OF COZ!

This annual pilgrimage to dive in costumes is always fun and very popular. We stay at the Casa Del Mar – our “home on the water”. With a startling number of gorgeous dive sites, it’s hard to choose where to dive first! Add to that all the fantastic food you could ever want, high end beer and booze, a pool bar, and a bunch of good dive buddies. It doesn’t get any better! 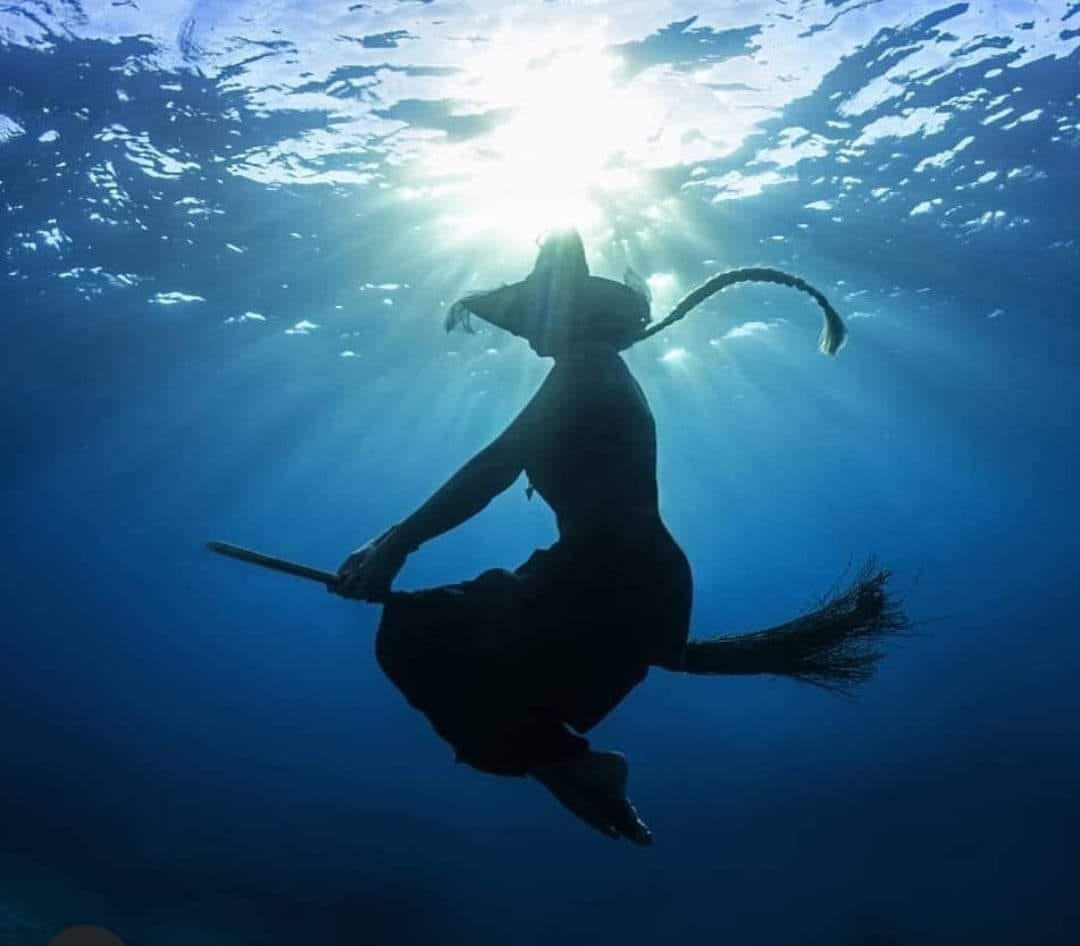 ONLY A FEW SPOTS LEFT!

Cayman Brac is located about 95 miles east of Grand Cayman and just 175 miles south of Cuba. In addition to world-class diving which is what brings most visitors to the island, there is growing interest in spending surface intervals hiking the island’s nature trails, biking its uncrowded roads, exploring its numerous limestone caves, and even rappelling or climbing the iconic Bluff.

Enjoy some of the best diving in the Cayman Islands at a small, casual resort with expansive grounds that offer spaces for guests to play or get away. There’s plenty of beach for everyone to find their own favorite place, and the large walk-in pool offers varying depths for swimmers of all ages. Beach volleyball is a popular activity for groups while NOT exploring the underwater world. In the late afternoons, guests enjoy fun bar games like Bingo and weekly crab races while enjoying their favorite beverages and waiting for dinner.

SPOTS ARE FILLING UP QUICKLY 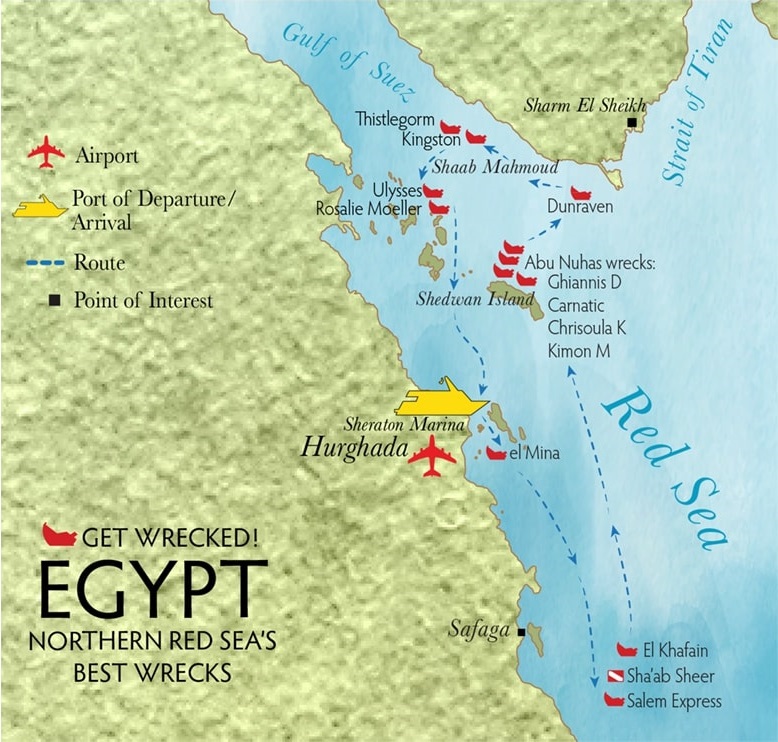 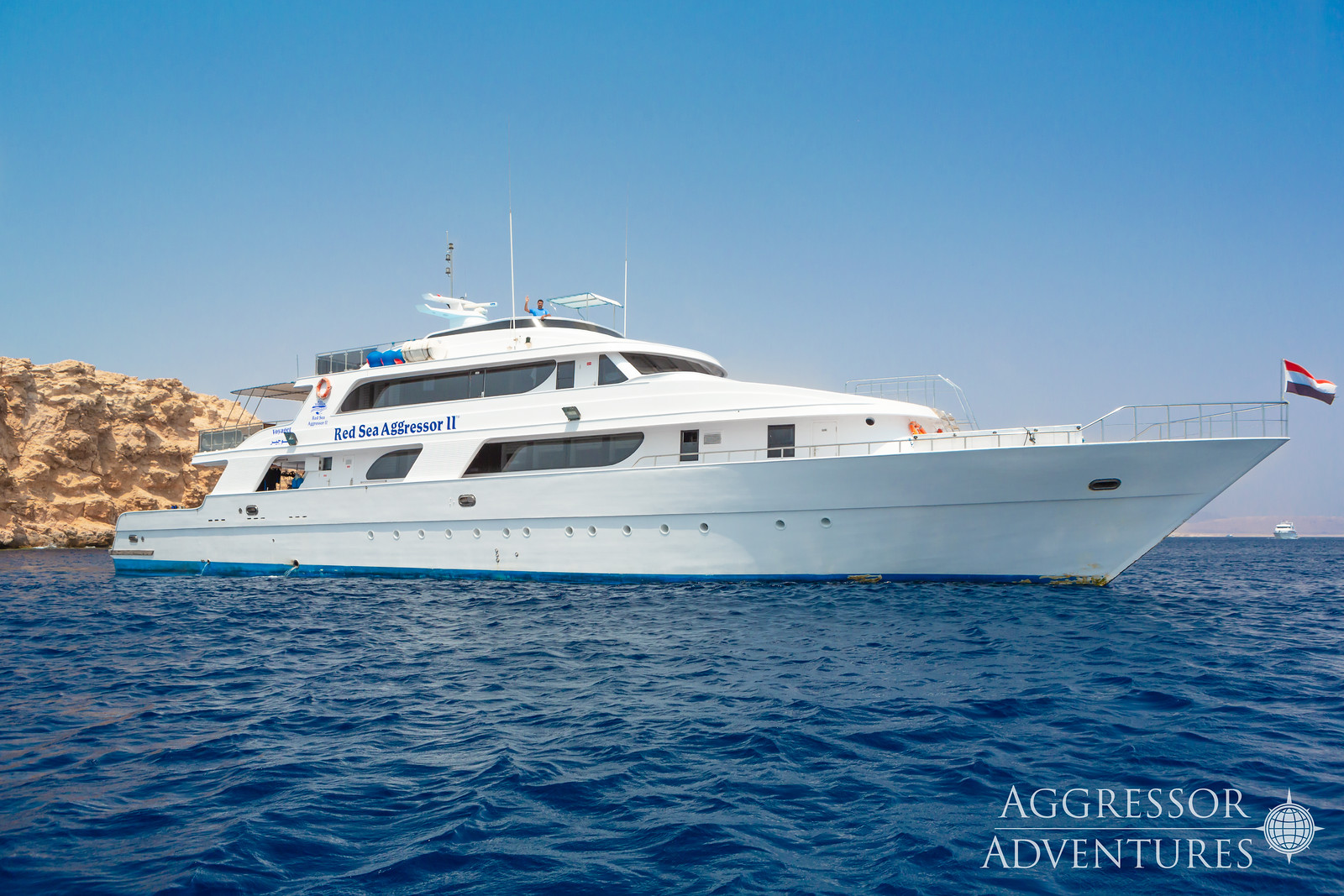 The Red Sea is known as having one of the most important waterways in the world even before the Suez Canal. It was an important trade route between Africa, Arabia, and others. With the Suez Canal being built in 1869 and joining the Red Sea to the Mediterranean and Europe to Asia, the Red Sea became one of the most important trade routes in the world. With the offshore reefs almost invisible at times, as the shipping lane increase, many ships were lost.

Itinerary Dive Sites:
El Minya/El Mina Wreck – The Russian-built minesweeper El Minya was sunk in 1970 during military tension between Egypt and Israel following Israel’s capture of the Sinai Peninsula in 1967. In retaliation to Egypt attempting to regain control of the Sinai Peninsula, Israel launched a bomb on the starboard side of her bow and she was sunk. The 58 meters (190 feet) ship now lies on her port side at a maximum depth of 32 meters (104 feet). The anti-aircraft guns are still in place towards the rear of the ship. The ship is home to large schools of glassfish and many other species of fish.

MV Salem Express Wreck – The Salem Express is the most controversial wreck in the Red Sea due to the tragic loss of life that occurred when she sank. The Salem Express was built in 1964 and was a roll-on, roll-off ferry for vehicles and passengers. She operated between the ports of Safaga in Egypt and Jeddah in Saudi Arabia. In 1991, she departed Jeddah with over 700 passengers with pilgrims returning from the holy city of Mecca and collided with Hyndman Reef during an unexpected storm and sank. Tragically, most lost their lives. Divers will be in awe because of the large size of the wreck. There are few hard corals growing on the wreck but divers will see jacks, pipefish, etc. The ship is resting at a depth of 12 – 30 meters (39 – 100 feet) on its starboard side with its bow doors wide open. The lifeboats with the distinct “S” emblem are indications that it sank so fast, the crew didn’t even get the chance to lower them. The twin-propeller blades and the smokestacks are other external attractions of the Salem Express.

El Khafain Wreck – El Khafain is one of the newer shipwrecks in the Red Sea and sank in 2005. She was a roll-on, roll-off ferry for vehicles and passengers and similar in appearance to the Salem Express. The ship departed Hurghada en route to Jeddah, Saudi Arabia when an explosion occurred in the engine room and started a fire which spread quickly. There was an attempt to tow the ship to port but it capsized while in tow, drifted, and sank in 25 meters (82 feet) of water with the top of the wreck at 6 meters (20 feet).

Abu Nuhas Location (4 wrecks) – In 1869, the Suez Canal established the Red Sea as the most important stretch of water near Egypt. Known as the Red Sea ‘graveyard’, Abu Nuhas is located north of Shadwan Island (the Egyptian Red Sea’s largest island). The submerged reef has claimed more vessels than any other in the Red Sea with at least four complete wrecks and other wreckage scattered throughout the area. The wrecks are laying in a chain on a sandy bottom of a steep sloping reef covered with table corals. Some of the items the wrecks carried were copper, port wine, and gold. The four wrecks the Red Sea Aggressor II dives are the Giannis D, Carnatic, Chrisoula K, and Kimon M:

Ghiannis D is a 100 meter (328 feet) long cargo ship originally built in Japan then bought by a Greek shipping company and renamed the Giannis D in 1980. She was en route from now known as Croatia bound for Jeddah, Saudi Arabia carrying a cargo of wood. After passing through the Suez Canal and into the Strait of Gubal, the ship ran aground into the reef of Sha’ab Abu Nuhas. The stern is partly intact at around 25 meters (82 feet) and the bow at about 18 meters (60 feet).

The rear half of the wreck lies on the port side. At the front of the funnel is the large letter “D” signifying the name of the shipping company, Danae. Crocodile fish, scorpionfish, parrotfish, and grouper call the vessel home. This wreck is located at a depth of 10 – 27 meters (30 – 88 feet).

Carnatic is thought to be the oldest wreck found at Sha’ab Abu Nuhas. Steam and sail-powered clipper, the Carnatic was sailing from Suez to India when she struck the reef in 1869. The ship broke in half when the crew and passengers were abandoning it resulting in the loss of 31 lives. The ship’s cargo included cotton, copper, and a huge load of gold. Salvage operations claim to have recovered the gold, however, rumors still exist that there still might be gold hidden on the wreck. The wreck lies at a depth of 10 – 27 meters (65 – 88 feet) with the hull covered in hard and leather corals.

Chrisoula K was originally built in Germany and christened the Dora Olendorff. The 100-meter long cargo ship was bound for Jeddah, Saudia Arabia carrying a cargo of Italian floor tiles. After leaving the Gulf of Suez, a navigational error saw the ship run full speed into the Abu Nuhas reef. The crew was safely rescued but the ship sank and now lies between 5 – 25 meters (16 – 80 feet).

The Kimon M cargo ship sunk in 1978 after hitting the Sha’ab Abu Nuhas Reef. It was carrying lentils and is also known as the ‘Lentil Wreck’ and lies in 32 meters of water at the stern. It initially was stuck on the reef until the storm and waves pushed the ship breaking the bow then the main body which sank in 10 – 29 meters (32 – 95 feet) depth. The stern with the huge propeller is still intact and easy to dive into. Due to its size, it is impressive to swim around from the outside and is home to schools of batfish and a huge napoleon.

Dunraven – The Dunraven was a Victorian sail and steam-powered ship that was carrying spices, cotton, and timber from India. In 1876, the Dunraven hit the reef during a dispute between the Captain with his wife and caught fire and sank. The wreck is broken into three parts and much of the hull remains intact with a swim-through by two huge boilers and the massive prop shaft. Inside the wreck are schools of glassfish, and yellow goatfish, and giant morays. The hull is covered with corals and full of marine life, like schools of batfish, nudibranchs, pipefish, and the rare ghost pipefish. Many other varieties of animal life can be found here. The wreck rests at 15 – 30 meters (50 – 95 feet).

SS Thistlegorm – The SS Thistlegorm is the most famous of the Red Sea wrecks. A freighter on a voyage to resupply the British Army in North Africa, the Thistlegorm was sunk in 1941. The English cargo ship was 129 meters long (423 feet) and was bombed by German aviation on October 6, 1941, in the area of Shaab Ali. She was transporting supplies destined for the British fifth army based in Alexandria as well as armored MGs vehicles, motorcycles, jeeps, trucks, rolling stock, airplane parts, stacks of rifles, radio equipment, munitions, and a plentiful supply of Wellington boots. Now the wreck is an artificial reef on a sandy bottom at 32 meters (104 feet) and is home to an enormous variety of marine life with large schooling fish. Additionally, the wreck provides a hunting ground for giant tuna and snappers.

Ulysses – The Ulysses was a 95 meter (311 feet) long steamship also rigged for a sail that sank at Gubal Seghir, an island in the Strait of Gubal over several days. The ship’s voyage was from England to China and after passing through the Mediterranean and Suez Canal, the ship ran aground on the northern side of Gubal Seghir. After several days of inclement weather, the ship sank. The propeller, shaft, and engine remain in place as well as some of the loading equipment on the deck.

Rosalie Moller – The Rosalie Moeller is the sister ship of the world-famous SS Thistlegorm. This former 108 meter (357-feet) long cargo ship was transporting coal, was bombed and sunk in 1941 by a German air attack during World War II. Now the wreck lies upright in 55 meters (188 feet) on a sandy bottom. The main deck is located at 35 meters (114 feet) and the mast rises up to 16 feet/18 meters depth. In the deeper parts of the wreck, the huge rudder and propeller are found as well as the ladders and handrails all along the main deck. Hard and soft corals cover the hull. This artificial reef attracts an interesting variety of marine life including barracudas, tunas, jacks, trevallies, glassfish, scorpionfish, and grouper.

Guests will spend the week diving up to 12 wrecks in the northern Red Sea. Up to 19 wreck dives and 2 reef dives will be offered; weather permitting. In between dives, guests may snorkel, explore secluded beaches, or just relax with a cold drink and mid-morning/mid-afternoon snack. Guests may dive up to 4 dives per day including night diving when possible.

Note: All fees subject to change

Additional trips are being added!!! Check back often!